As next year is the 140th anniversary of the Anglo-Zulu War I have rashly decided that George and I (and hopefully Steve and maybe Matt) should try and play some AZW games using The Men Who Would Be Kings at BIG (having had great enjoyment playing Sudan games with them).

So today I thought I better get on with my horde of Zulus and have undercoated four units of 16 married Zulu tribal infantry (first black, then sepia brown over). 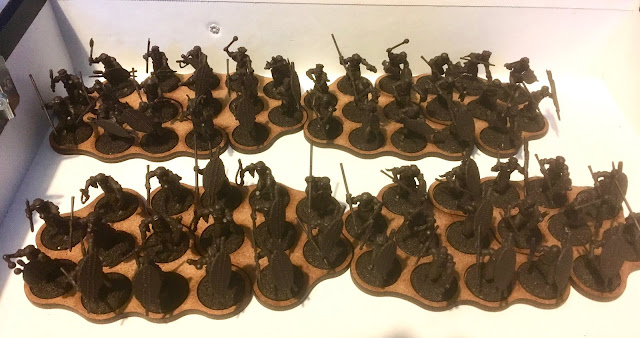 I also have done the same to two units of 16 unmarried Zulus as well. In game terms that gives me 24 points.

Over the festive period I want to make up another two units of unmarried Zulus and some rifle armed skirmishers and weather permitting get them to this stage.
Posted by Steve at 15:52